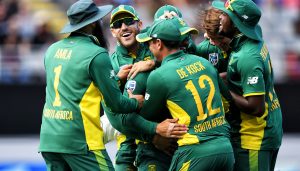 For the upcoming 2 ODI’s against Pakistan, South Africa have included uncapped batsman Rassie van der Dussen in the squad.

The 29-year-old was among the 14 men included for the matches in Port Elizabeth and Durban this month. He also played in 2 T20’s against Zimbabwe a year ago and could get his shot in the 50-over series.

Paceman Dane Paterson has been re-inserted and Hashim Amla returns in the wake of recouping from finger damage that ruled him out of the series in Australia.

JP Duminy and Lungi Ngidi pass up a great opportunity because of shoulder and knee wounds individually.

#SAFMSportOn with @ThabisoMosia We will also speak to the Proteas Convener of selectors Linda Zondi as the world cup edges closer. Hashim Amla has returned to the latest ODI squad with Rassie van der Dussen the only uncapped player. 7-8 pm. pic.twitter.com/CrY46WJhbp

I’m expecting a Rassie van der dussen in that Proteas ODI squad presser today.I feel he has out did himself with his big hitting abilities #SAvPAK