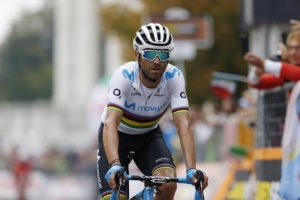 Some of the other significant upgrades were of  Dumoulin Tom,  Pinot Thibaut and  Roglič Primož who are now placed at 6th, 7th and 8th place respectively.

Spain replaced Belgium to place itself at the top of the Men’s Nationwise Cycling rankings with  France placed at the 3rd position. Some of the significant upgrades were of Australia, Slovenia and United States who are now placed at 8th, 11th and 14th place respectively.

Owing to it’s consistent performances Quick-Step retained it’s top position followed by Team Sky who is placed at the 2nd place in the Men’s Team cycling rankings. Movistar Team upgraded it’s rank by one position while Astana Pro Team jumped 4 ranks up. Both are now placed at 3rd and 4th positions respectively.

Some of the other significant upgrades were of Bahrain Merida Pro Cycling Team, UAE-Team Emirates and Wanty – Groupe Gobert who are now placed at 6th, 15th and 18th place respectively.