These are the next 3 matches of La Liga, Match Day 3 of 38. The highlights are appended below the points table.

Match 3 of 10: Eibar vs Real Sociedad

And then they chose to show #Eibar’s 2-1 win over #RealSociedad on a different channel here, not on beIN’s main channel here.? It was Girona’s win at Villarreal on beIN here instead. https://t.co/ktlbnbOxwC

A huge come from behind win for Eibar today, especially since the first game back is at the Wanda. Aupa Eibar!

Girona and Eibar get themselves three vital points each. Wouldn’t have tipped either to win tonight. The start of LaLiga has certainly been full of surprises.

For all the plastics who want Simeone, it’s only fair to tell u all that his club just got battered at celta vigo, drew with Valencia & have only scored 2 times in 3 la Liga matches.
It seems only when these coaches win our fans ever mention them. So I’m gonna balance things out

When you see Atletico Madrid are losing 2-0 to Celta Vigo after you tipped them to win La Liga ? pic.twitter.com/Es5cPp20M2

Match 5 of 10: Real Madrid vs Leganes 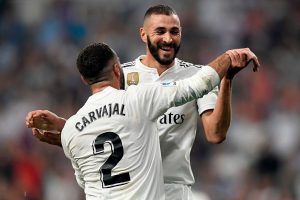 Gareth Bale and Karim Benzema continued their impressive starts to the LaLiga season to inspire @realmadrid to an impressive 4-1 win over Leganes on Saturday night. #SLInt https://t.co/hY3c0nqhSI

Real Madrid 4-1 Leganes: Karim Benzema bags a brace after Gareth Bale’s opener: Real Madrid maintained their 100 per cent start to the season with a resounding win over Leganes at the Bernabeu on Saturday evening. https://t.co/dYyVdby3in pic.twitter.com/9FLUBJVAcA

I’m sorry but Luka Modric wining UEFA Player of the Year is a joke. His teams didn’t win their domestic league or the World Cup and he wasn’t man of the match in either of the finals he played in. Yeah Real Madrid won the UCL but he wasn’t undeniably amazing.