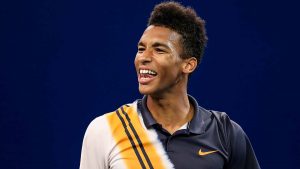 “It feels nice. It was one of my objectives this year to go maybe deep in an ATP 250 or 500. Now I’m here in the quarter-finals, and the tournament’s not done yet, so it’s a very nice feeling and hopefully I can go far,” Auger-Aliassime said.

He raced out to a 4-1 advantage but could not convert a set point chance at 5-4, with Chung serving at 30/40. The Canadian, however, broke clear from 2/2 in the tie-break to take the first set.

Chung rebounded in the second, though, breaking in the 12th game. But Auger-Aliassime broke right back to start the third and served out the match to love.

“You have to believe in yourself to win these kind of matches, to play against these players,” Auger-Aliassime said. “My plan was… I’m going to play every point, give it everything, and play with my strengths. The keys today were my serve, and I was also able to dictate most of the rallies, and I was very tough mentally… That really paid off.”

The Canadian, who’s the youngest player inside the Top 200 of the ATP Rankings, started the week in 15th position in the ATP Race To Milan. The top seven players in the Race will qualify automatically for the Next Gen ATP Finals, while the eighth spot will be reserved for the winner of an all-Italian qualifier tournament to be held just prior to prestigious 21-and-under event. Auger-Aliassime is 310 points behind seventh-placed Andrey Rublev.

With his win over Hyeon Chung, Canadian talent Felix Auger-Aliassime becomes the first male player born in 2000s to reach an .@ATPWorldTour QF, at .@ChengduOpen.#FAA #Chengdu

“There are a lot of good players ahead of me. Maybe I’ll get there but I have to start with this week and then we’ll see how it goes for the rest of the year,” Auger-Aliassime said.

He will next meet Aussie Bernard Tomic, who saved one match point to reach his second ATP World Tour quarter-final of the season. Tomic beat fellow qualifier Lloyd Harris of South Africa 7-6(5), 2-6, 7-6(6) in two hours and 12 minutes, saving one match point at 5/6 in the deciding set tie-break. Harris, who beat fifth seed Gael Monfils in the first round, struck 23 aces.

Seventh-seeded Portuguese Joao Sousa saved two match points at 4-5 in the third set of a 6-7(4), 6-4, 7-6(0) comeback win over Vasek Pospisil. Sousa couldn’t convert a set point in the first set at 5-4, with Pospisil serving at 40/30, but battled to extend his FedEx ATP Head2Head record to 4-0 against the Canadian, who had led 5-2 in the decider. Sousa now meets Malek Jaziri, a 6-3, 7-6(5) victor over fourth seed Adrian Mannarino.