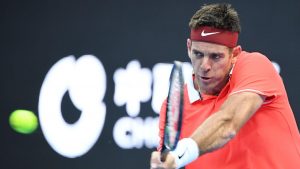 The Argentine, Potro playing his first match since losing to Novak Djokovic in the U.S. Open final a month ago, looked in fine shape as he let won 86% of points on his first serve, which included 10 aces to seal triumph in 1 hour and 30 minutes.

Top-seeded @delpotrojuan makes a winning start in Beijing with a 7-5 6-2 triumph over Albert Ramos-Vinolas. #ChinaOpen pic.twitter.com/pBfRnti9nZ

The 30-year-old Argentine, Juan Martin Del Potro can meet all requirements for one month from now’s ATP Finals in London, only if he makes his way to the final in the ongoing China Open.

Meanwhile, Rafael Nadal, Djokovic and Roger Federer have anchored their places in the season-finishing competition.

Live Race to London for the #ATPFinals:

Bulgaria’s Grigor Dimitrov, a finalist in Beijing two years back, started his battle with a strong 7-5 6-3 triumph over American Tennys Sandgren.