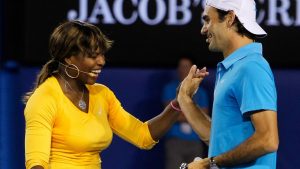 Serena Williams is set to confront Roger Federer in her first competition of the 2019 season, when the USA play Switzerland in the blended pairs at the Hopman Cup.

The 37-year-old, Williams has not played since her thrashing at the controversial US Open 2018 final, by the Japanese Naomi Osaka.

Since winning the Australian Open 2018, with 2 weeks pregnancy, this will be the first time, that Serena Williams will play in Australia, as she missed the competition a year ago as she was not completely fit.

The Hopman Cup is scheduled from 29th December, with the final to be held on 5th January.

The future of the #HopmanCup might be in doubt but the 2019 edition will be a big one. Serena Williams joins Roger Federer (on different teams of course) at Perth Arena from Dec 29 ?

Serena, Federer to meet at Hopman Cup: Serena Williams and Roger Federer are set to face each other in the Hopman Cup after the pair were confirmed to represent USA and Switzerland respectively. https://t.co/6g2MPZvV9e pic.twitter.com/p3qG6kSq4s

Media keeps hyping Serena vs Roger at Hopman Cup for headlines (which is okay!) but I’m just excited to see these two icons play the same tournament. We’ll hopefully see them on the opposite sides of the net if they square off in mixed doubles. Hopman Cup is incredible.