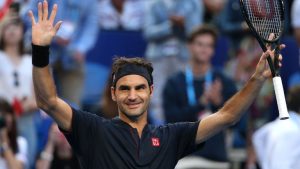 The defending champions Switzerland defeated Great Britain aside with a 3-0 triumph at the Hopman Cup.

The Swiss match at that point finished the triumph with a 4-3 (4-0) 4-1 win in the mixed doubles in Perth, Australia.

Now, the 22-year-old, Boulter and the 23-year-old, Norrie, will face Serena Williams’ USA on Thursday. Previously, on Saturday in the opening tie of the competition, they overcame Greece.

In a round-robin format with two groups of four, the Hopman Cup involves mixed doubles challenge and two singles matches between countries.

Roger Federer and Belinda Bencic cruise to Hopman Cup victory over Britain https://t.co/um2ZwnknMP -Serena remember how we win matches? We win them in our minds on our beds and then we come and execute. No tantrums leae that to your President.