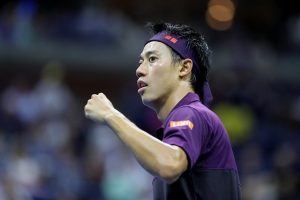 Kei Nishikori continued his climb back toward the Top 10 of the ATP Rankings on Friday, battling past fifth-seeded Georgian Nikoloz Basilashvili 6-3, 4-6, 6-4 to reach the semi-finals of the Moselle Open.

“It was a tough, tough match today, but somehow I fought through and I’m happy to be in the semi-finals tomorrow,” Nishikori said. “He was playing better in the second [set]. I thought I played almost perfect game in the first set and I almost had it, but he came back. It was tough. He was up 3-1 in the third, and I had to refocus again and rebuild my confidence and had to play a little bit better in the end. It wasn’t an easy game.”

The Japanese star dropped as low as World No. 39 in April and was No. 28 as recently as July. But since, the 28-year-old has found form reminiscent of his days inside the Top 5. Nishikori, who advanced to the US Open semi-finals, is now just two wins from lifting his first ATP World Tour trophy since 2016 Memphis. He is currently in 10th position in the ATP Race To London for a place at the Nitto ATP Finals, to be held at The O2 in London from 11-18 November.

Could @keinishikori lift his first tour-level ? since 2016?

The ?? beat Nikoloz Basilashvili in three sets to reach the semi-finals of the @MoselleOpen ?.

The top seed faced a stiff test against the free-swinging Basilashvili, who advanced to the fourth round at Flushing Meadows (l. to Nadal) and claimed his maiden tour-level title in Hamburg. But the 28-year-old won 83 per cent of first-serve points and won five of eight break points to reach the last four, where he will face qualifier Matthias Bachinger, who beat German Yannick Maden 6-3, 2-6, 6-4.

Bachinger arrived in Metz with just one tour-level match win in 2018. But not only did he reach his first ATP World Tour quarter-final since 2014 in Stockholm, the German can now advance to his first tour-level final.

Kei Nishikori comes back from a break down in the 3rd to beat Nikoloz Basilashvili 6-3, 4-6, 6-4 and reach the Metz SFs for the 1st time.

Back to back SFs for Kei (after the US Open). Gets Bachinger or Maden tomorrow. pic.twitter.com/5v41D93ZlQ

Two-time former champion Gilles Simon broke an eight-match losing streak against Richard Gasquet, the fourth seed and 2004 finalist, with a 7-6(4), 6-2 victory over one hour and 34 minutes. The pair first clashed in June 2006 at Nottingham (Gasquet leads Simon 8-1).

Simon had come into the event having lost five of his past six matches, but with victory over Gasquet, the 33-year-old is one win away from his 21st ATP World Tour final (13-7 record). He won the Tata Open Maharashtra crown (d. Anderson) in the first week of the year, and also finished runner-up at the Open Parc Auvergne-Rhône-Alpes Lyon (l. to Thiem) in May.

Moldova’s Radu Albot advanced to his first ATP World Tour semi-final, where he will challenge 2010 and 2013 Metz titlist Simon, after beating Ricardas Berankis of Lithuania 7-6(4), 6-4 in one hour and 42 minutes.