This is the first match of La Liga, Match Day 5 of 38. The highlights are appended below the points table.

Match 1 of 10: Huesca vs Real Sociedad 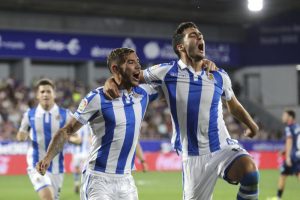 Watching Real Sociedad against Huesca. Somehow, some way, Sociedad got away with a 1-0 win with 9 men. WHAT?

Not a bad first half of football. Huesca much improved tonight, makes the changes from last weekend look even more puzzling. Home side should be buoyed on by the fact that Real Sociedad like to throw games away in the second half.

DRAMA in Huesca to finish of our @LaLiga match! @RealSociedad took the lead and then got TWO men sent off… but still managed to hold out and get the win! ⚽️??@SDHuesca yet to take their first LaLiga points at home.

LOAN WATCH: Theo Hernández played 82 minutes, provided an assist and got sent off in Real Sociedad’s 1-0 win over Huesca.