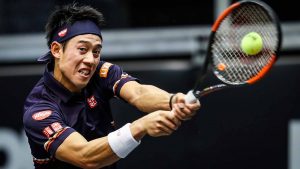 After a straight set win over the defending champion, Peter Gojowczyk, Kei Nishikori is through to the quarterfinals of the Moselle Open 2018. The scoreboard read 7-6(4), 6-3 as Nishikori setup a quarterfinal tie on Friday.

Nishikori appeared to be in blazing form, after his unfortunate loss to Djokovic in the US Open 2018, semi-final this year. Gojowczyk showed some fight in the first set as the current world No. 12, Nishikori was forced into a tie-break, which he won in the end.

Contrary to the first set, the second one was an easy win for Nishikori as the Japanese tennis superstar proceeded into the quarter-finals.

Tennis – Pan Paicific Open ’18: Naomi Osaka Advances Into The Round Of 16

The win was wrapped up by Kei Nishikori in 1 hour, 33 minutes, courtesy of Gojowczyk who was unable to save any of the two break points against Nishikori.

In the last 8 of the ongoing Moselle Open 2018, Kei Nishikori will be accompanied by Richard Gasquet, who triumphed against compatriot Constant Lestienne 6-4, XX. Meanwhile, in the other 32 match-ups of the day, Gilles Simon, Benoit Paire, Filip Krajinovic and Marton Fucsovics won their individual games to move into the quarter-finals.

Gojowczyk will drop to at least World #70, while Nishikori is still Live #12 and Live Race #10. #ATP #Tennis

Top-seeded Kei Nishikori reached the quarterfinals of the Moselle Open by beating defending champion Peter Gojowczyk of Germany, 7-6 (4), 6-3 on Wednesday.