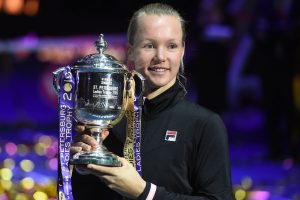 Kiki Bertens ricocheted again from a lazy beginning to vanquish Donna Vekic in an exciting final and win the St Petersburg Ladies Trophy on Sunday.

Second seed Bertens was 5-2 down in the opening set yet indicated a huge potential to fight back and complete a 7-6 (7-2) 6-4 triumph for her eighth WTA title.

Vekic beat the competition in a 20-shot rally in the opening match and proceeded to seal a break, yet she was not able see out the primary set.

World number eight Bertens dashed crosswise over court for a splendid winner and a break to love in game eight and she proceeded to compel an improbable tie-break, which she asserted when Vekic neglected to restore an incredible serve.

The Dutchwoman constrained Vekic from corner to corner with exciting groundstrokes before assaulting the net and delivering a sweet drop-volley to place herself into position to serve out the set.

Bertens’ festivals were stopped when Hawkeye demonstrated Vekic had discovered the line and not gone long on title point, but rather, subsequent to losing the following two points, she at last triumphed on a netcord victor.

Big win for Kiki Bertens at St. Petersburg defeating Donna Vecic 7-6 6-4 in the final and climbing up the rankings. #Supertennis

Have to be impressed by the fact that Kiki Bertens improved her career winning percentage in #WTA level finals to .800 with her win over Donna Vekic in St. Petersburg today. Now 8-2.