Tennis – Pan Paicific Open ’18: Naomi Osaka Advances Into The Round Of 16 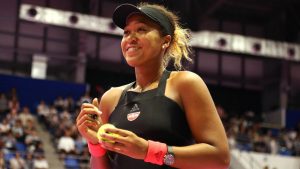 Japan’s Naomi Osaka defeated Dominika Cibulkova 6-2 6-1 at the Pan Pacific Open in Tokyo, in what was her first match since winning the US Open 2018.

The 20-year-old beat Serena Williams to win her first Grand Slam prior this month, a triumph dominated by Williams’ rant at the umpire.

The 3rd seed hustled to triumph in 59 minutes against Slovakia’s Cibulkova.

The @torayppo crowd are delighted with Japan’s first Grand Slam champion!@Naomi_Osaka_ has a chat after her stunning win against @Cibulkova in Tokyo!#東レppoテニス#大坂なおみ pic.twitter.com/j7N7A4GbFI

Cibulkova has been amidst a career resurgence, since achieving the quarterfinals of Wimbledon, upsetting previous No.1 Angelique Kerber on the way to the 2nd week stretch of the US Open, however could not make a mark on Naomi Osaka serve, as the No.3 seed endured without confronting a solitary break point.

It’s got to be pure adrenaline by now, as @Naomi_Osaka_ hasn’t stopped since winning the US Open 10 days ago. But she steamrolled a very good opponent in her Tokyo opener Wednesday. https://t.co/bLn8NTVifO

Osaka earned an ethusiastic applause after the match, hitting 25 winners, to only nine unforced mistakes as she changed over 5 of 9 break point openings.

She will play either Barbara Strycova of the Czech Republic or Estonia’s Anett Kontaveit in the quarter-finals.

Yay to your victory today @Naomi_Osaka_ ✨

A star and a sweetheart ♥️
Just thinking of how many people shes touched and will continue to, especially all the mixed kids in the world, is… https://t.co/u3lBOO9g4b

Japan’s Naomi Osaka has won her first match since clinching the US Open by beating Dominika Cibulkova 6-2 6-1 at the Pan Pacific Open in Tokyo. pic.twitter.com/KWjsi8Ybcw

UFC – Conor McGregor Vs Khabib Nurmagomedov: The Fight Of The...