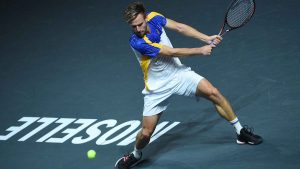 Having won seven matches from qualifying to lift his maiden tour-level title at the Moselle Open in 2017, defending champion Peter Gojowczyk needed every ounce of his talent to notch another victory at the French event on Tuesday.

The German recovered from a set down, landing 17 aces, to overcome three-time champion Jo-Wilfried Tsonga, making his return from knee injury, 6-7(5), 6-3, 6-4 in one hour and 45 minutes.

Competing for the first time since the Open Sud de France in February, Tsonga delighted the home fans with strong serving to take a one-set lead, before Gojowczyk battled his way back into the match to secure victory.

The 29-year-old, who reached his third tour-level final in Geneva four months ago, saved all three break points he faced and withstood an equal 17 aces from his opponent to book his spot in the second round.

Gojowczyk’s route to a second title in Metz gets no easier, with top seed Kei Nishikori standing in the German’s way of a place in the last eight. This will be the first tour-level meeting between Gojowczyk and Nishikori.

The Hamburg titlist, who reached the semi-finals in Metz last year, dropped only eight points on serve throughout the 64-minute encounter, cruising to victory with a dominant second-set tie-break performance.

Basilashvili will, once again, face French opposition in the second round after #NextGenATP star Ugo Humbert rallied from a set down to beat Bernard Tomic 6-7(5), 6-3, 6-4. Humbert fired 17 aces and converted both break points he manufactured to progress after just over two hours.

Did You Know?
Seven of the past nine editions of the Moselle Open have been won by French players. Jo-Wilfried Tsonga (3), Gilles Simon (2), Lucas Pouille and Gael Monfils have all lifted the trophy in front of their home crowd since 2009.