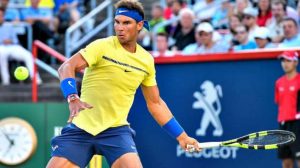 The Spaniard, Rafael Nadal stays strong at the top of the Men’s Singles Tennis rankings with Roger Federer and Alexander Zverev placed at the 2nd and 3rd position respectively.

Grigor Dimitrov broke into the Top 5 ranks by replacing the Wimbledon runner up, Kevin Anderson. Other significant upgrades were of Fabio Fognini, Kyle Edmund and Lucas Pouille who are now placed at 14th, 16th and 18th position respectively.