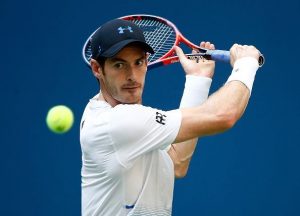 “I felt he played very well after the first set,” Murray said. “I just managed to fight hard, stay tough in the beginning of the third set and unfortunately for him, the cramps started. It was very difficult conditions.”

Andy Murray given a challenge by Zhizhen Zhang before the Chinese wild card retires at 4-2 down in the third set. Murray next plays David Goffin on Thursday #Shenzhen

It was Murray’s first match since the US Open, when he fell to Spain’s Fernando Verdasco in the second round. The Brit will next meet top seed and defending champion David Goffin.

Canadian Denis Shapovalov led the #NextGenATP charge, winning a rain-interrupted first-round match 7-5, 2-6, 6-3 over Ilya Ivashka of Belarus. The match was suspended for more than three hours.

“I think once we came back from the break, we played better,” said Shapovalov, who will next play Japanese qualifier Yoshihito Nishioka. “It’s been tough conditions here today, but I felt much better on my return to the court.”

Indian qualifier Ramkumar Ramanathan knocked out Jiri Vesely of the Czech Republic 7-5, 6-1 in 90 minutes to set up a second-round matchup with fourth seed Damir Dzumhur of Bosnia and Herzegovina.