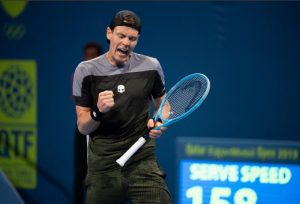 The two players fought admirably to make it a match to remember. This was the first time that Tomas and Filip went head-to-head on an ATP Tour.

When Berdych went a break up in the second set, it looked as though hwas cruising through in straight sets. Yet, Krajinovic, a Paris Masters finalist in 2017 after an amazing run from the passing rounds, broke back, took the sudden tiebreaker and afterward drove 5-4 and 40-15 in the third.

At that point, Berdych, who is unseeded at the competition, turned the challenge around.

Meanwhile, seventh-seeded Pierre-Hugues Herbert of France who defeated third-seeded Denis Shapovalov of Canada 7-5, 7-6 (4) will now face the 33-year-old Czech in the next round.

Previously, in the quarterfinals of the Doha Open, Herbert had been beaten by Berdych, prior this year.

Absolutely all the same to your words, we are now very happy and you will not spoil our joy. Wait for Tomáš on Sunday with the title!