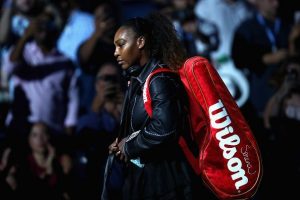 Serena Williams made a triumphant comeback to the US Open, opening her campaign for a record-tying 24th grand slam title with a 6-4 6-0 first-round triumph over Magda Linette.

Williams, a six-time champion at Flushing Meadows, could not participate in last year’s competition, as she was going through her pregnancy period.

However, in her return to the US Open this year, Serena appeared to be in blazing form under the floodlights at Arthur Ashe Stadium, where she has lifted the trophy many times on previous occasions.

Linette, the World No. 68 from Poland who was confronting Williams for the very 1st time, stood her ground in the early set. Be that as it may, Williams broke her in the 7th game of the opening set to pick up the high ground and from that point on, the American star dominated the match.

To think I finally got the chance to see THE Serena Williams live ??? the woman who piqued my interest in this wonderful sport. Seats weren’t as close but could still hear her loud KAMAN!!! my heart is filled ❤️❤️ #USOPEN pic.twitter.com/InMUfa9880

After Williams held serve from deuce for a 5-3 lead, Linette constrained her to serve out the set. From that point, it was all Williams as she dashed through the 2nd set in 28 minutes.