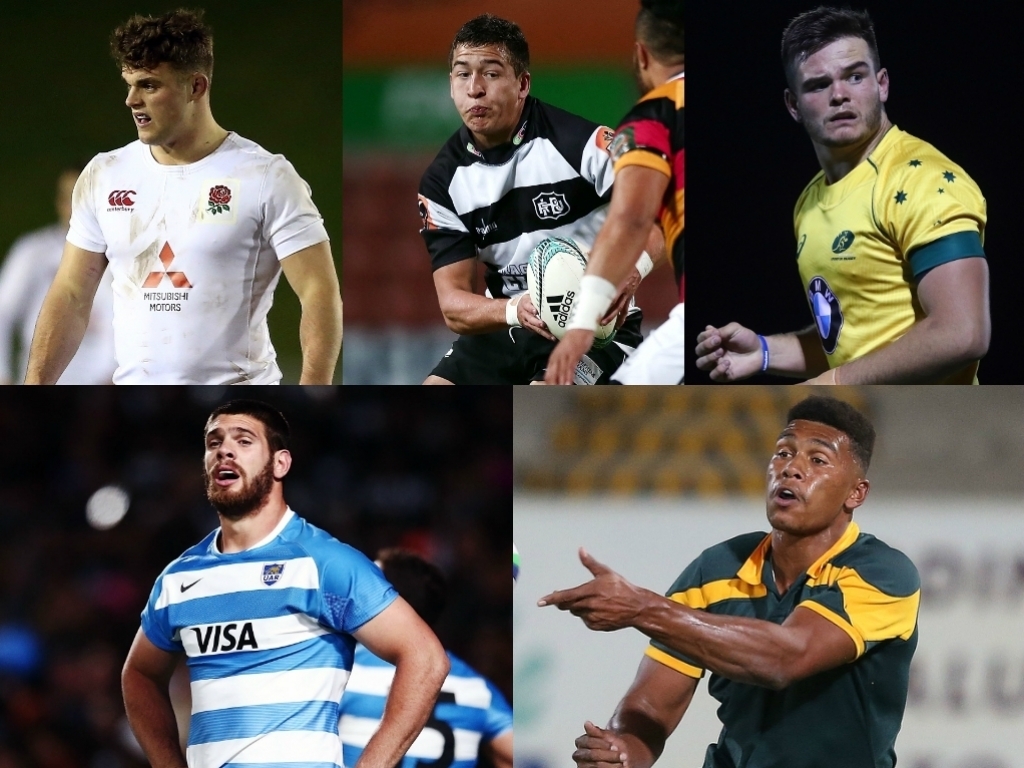 The opening matches of the 2017 World Rugby U20 Championship in Georgia are just days away and excitement is building for another stellar tournament.

The likes of Maro Itoje, Garry Ringrose and Jordie Barrett are among the recent stars to graduate from the championship and with each passing year, the jump from this age-grade showpiece to senior stardom seems that little bit less.

We have taken a look some of the key players to keep an eye on who will not only set Tbilisi and Kutaisi alight over the coming weeks, but who are also primed to take big steps forward in their rugby careers over the next season or two.

Rhys Carre (Wales): This Cardiff-born loose head was the star of the show for Wales during the U20 Six Nations, not only helping turn the screw at the scrum, but also displaying athleticism and technical skill in the loose. None of the tight heads that went head-to-head with Carre came out with much, if any credit and the young prop is already drawing comparisons to Welsh legend Gethin Jenkins.

It’s only Carre’s first year of U20 eligibility, so we could well see him again in 12 months’ time, but such his ability and physical-readiness, he is a strong candidate to be fast-tracked by both Cardiff Blues and Wales next season.

If Carre can help provide the platform, look for fly-half Ben Jones and wing Ryan Conbeer to also shine.

Ben Earl (England): Let’s be honest, no one needs to be told to watch Zach Mercer, given his heroics in England’s Grand Slam at the U20 Six Nations and his impact on Bath’s senior side this season.

Earl, Mercer’s back row colleague, comes in a little more under the radar, despite captaining England against both France and Wales, before injury curtailed his Six Nations. He is one of the modern breed of back rows, competent across the board in terms of his physical and technical skills.

Alongside Mercer, Earl will spearhead a back row that is arguably the most impressive at the championship – even without the Curry twins – and will be key for England if they are to defend their title.

Keep an eye out for loosehead Ollie Dawe, centre Will Butler and versatile back Gabriel Ibitoye, too.

Tiaan Falcon (New Zealand): There may be no more reliable predictor of future success than the New Zealand U20 ten jersey.

Whether you go to on to shine for the All Blacks like Beauden Barrett and Aaron Cruden, switch allegiances and move abroad like Gareth Anscombe and Tyler Bleyendaal, or simply light up Super Rugby like Damian McKenzie, the future is certainly bright and the latest man to fill that illustrious jersey is Falcon.

The Hawke’s Bay fly-half is the son of former Maori All Black and Hurricanes back rower Gordon Falcon and he is ready to add his name to the Hurricanes’ enviable cadre of playmakers, that include the Barrett brothers and former New Zealand U20 Otere Black.

Look for Falcon to feed off the front-foot ball that the impressive duo of Luke Jacobson and Isaia Walker-Leawere should give him, as well as his combination with dynamic scrum-half Ere Enari.

Reece Hewat (Australia): It’s been a tough couple of years for the former Australia Schoolboys captain, who suffered a string of injuries in 2015 and 2016, but he is now fit and ready to show the world that it’s not all doom and gloom in Australian rugby.

A powerful number eight, Hewat can add power and punch to the Australian pack, an area where they often are found wanting at U20 level, and if he can bring that consistent gain-line success, then Australia have the backline and runners to cause problems for defences on the back-foot.

The scrum is another area Australia tend to struggle, so his control of the ball at the base will also be key, as will his skills as a captain when his side are confronted with strong English and Welsh set-pieces in the pool stage. If Hewat can help Australia to get forward and gain-line parity, backs Nick Jooste, Sione Tuipulotu and Izaia Perese can be unleashed.

Callum Hunter-Hill (Scotland): Along with elusive back three threat Darcy Graham, Hunter-Hill was the standout in a disappointing Six Nations for Scotland. The lock was valiant in several losing causes and proved himself to be a very fundamentally-sound player.

“Fundamentally-sound” may not catch the eye like sensational, length of the field tries, but it is something every team needs and something that usually correlates more positively with success when stepping up to the senior level.

He has just made the move to Edinburgh from Glasgow, taking him out of an engine room likely to be dominated by Jonny Gray and Scott Cummings for the foreseeable future, so a strong U20 Championship will go a long way to impressing Richard Cockerill and earning him playing time next season.

Marcos Kremer (Argentina): This monstrous lock has already made his debut for Argentina at senior level and was one of the stars of this tournament last season.

His marauding runs and bone-jarring tackles were a driving force behind Argentina’s highest ever finish of third at the 2016 tournament and they will need him to replicate that game-changing dynamism this season if they are to make the semi-finals again from a pool also including France and South Africa.

It’s a little surprising Kremer wasn’t called upon by the senior Argentina side again, given the developmental nature of the England side touring South America this year, but that decision will be warmly received by the U20s, who retain the physical presence to complement their elusive back line talents such as Bautista Delguy and Tomas Malanos.

Calvin Nash (Ireland): Ireland have been riddled by injuries heading into the tournament and with no Jordan Larmour, Tommy O’Brien or Rob Lyttle, the back-line is going to be heavily reliant on Nash to provide them with the cutting edge they need to get past Scotland and to try and upset the odds against New Zealand.

As with every back three coming through the Irish system these days, Nash is well-schooled in the aerial contest, can kick well and is no revolving door in defence. With so many players out, including second year fly-halves Bill Johnston and Johnny McPhillips, Ireland may need a fair bit of magic from Nash to get them to the semi-finals this year.

Uncapped prospect Angus Curtis will be key in getting the ball to Nash and playing the game in the right areas for the wing to succeed, whilst impressive forwards Fineen Wycherley and Paul Boyle will need to back up strong Six Nations campaigns to ensure the inexperienced back-line are given a solid platform.

Romain Ntamack (France): France’s Six Nations campaign was given a big shot in the arm after they gave the ten jersey to Ntamack and though still U18 eligible, he has shown no signs of being out of his depth with players two years his senior.

The son of France and Toulouse legend Émile, Romain is as poised a fly-half as you could expect any 18-year-old to be and there’s an effortlessness and grace that he brings that every team looks for in a fly-half. There are facets in defence and game management where he is still a work in progress, but that is not to say he is deficient in either area.

If he is given anything even resembling decent ball, he will be a threat to unleash the fastest back three at the tournament in Gabriel N’Gandebe, Geoffrey Cros and Faraj Fartass.

Given the poor league performance and high spending of Toulouse, they could do worse than start to involve Ntamack in the senior squad and matchday 23s next season, such is his talent.

Damian Willemse (South Africa): This selection is a little bit of a wildcard, not because Willemse lacks ability or talent, but because he is not a guarantee to start as the others listed above are. With Curwin Bosch and Manie Libbok returning for their second years with the Baby Boks, they could well occupy the 10 and 15 jerseys.

If that is the case, Willemse could be the archetypal “super sub” in Georgia. He is a former star at schoolboy level and if you were to list the qualities that make up a prototype fly-half, Willemse would have them in spades. He is fast, strong, skilful, brave in the tackle and kicks very well, both from the tee and from hand.

If those skills translate and stay with him at U20 level, his place on the fringe of the Stormers senior team will soon change and he will become a key cog in their bid to return to being a title-challenging franchise.

If Willemse is held back slightly in his first year of U20 eligibility, the likes of lock Salmaan Moerat, flank Zain Davids, back rower Ernst van Rhyn and wing Yaw Penxe are all valid candidates to be mentioned here.