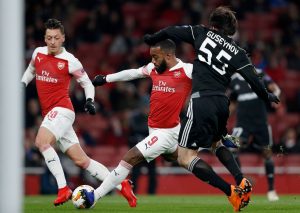 Arsenal are now unbeaten in their last 22 games across all competitions:

The run goes on and on. pic.twitter.com/MEkywsKw7p

22 – Arsenal are unbeaten in 22 games in all competitions (W17 D5 L0) last losing against Chelsea back in August – the Gunners longest unbeaten run since November 2007 (a club record 28 games). Progress. pic.twitter.com/I9Tvq17G5V

Arsenal now have five players on the pitch vs. Qarabag who are aged 21 and under.

FT 1-0 #afc Job done. Saka promising, Koscielny eased back in, Ozil assist and Lacazette goal. Arsenal now 22 games unbeaten but much sterner tests than this to come before the end of the month. Fan ran on with an Armenian flag near the end which incensed a few Qarabag players.

Arsenal have now recorded five successive clean sheets in the Europa League, equalling an all-time record in the competition.

You shall not pass. ? pic.twitter.com/azRbwzyY0b