Golden State Warriors, who were the defending champions, won the first game of the NBA finals in overtime with a score of 124-114 against Cleveland Cavaliers. Game one between Warriors and Cavaliers was played at Oracle Arena in Oakland.

It was a thrilling match as everybody witnessed the exquisitive performance of Lebron James, who scored 51 points for the Cavaliers in the whole match. However, on the other hand, Stephen Curry of Golden State Warriors scored 29 points for his team. 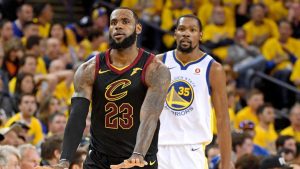 This was the fourth time in a row that the Cavaliers were defeated by the Warriors in the game one.

Allsportspk presents to you the match highlights of game one of the final match played between Golden State Warriors and Cleveland Cavaliers.

That is it for now. Do join allsportspk on 4 June for Game 2 of Warriors Vs Cavaliers.