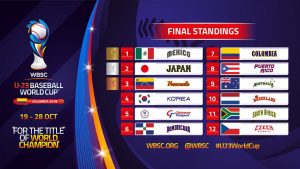 COLOMBIA: Mexico’s Under-23 Men’s National Baseball Team won for the first time the Baseball world championship, by defeating Japan in the Final of the WBSC U-23 Baseball World Cup2018.

The Mexican U-23 National Baseball Team’s scored an historic 2-1, 10-inning victory in front of 7,000 plus fans at Estadio Edgar Renteria in Barranquilla, Colombia.

The order of the positions held by competing country teams were as follows:

The victory received in Mexico with great excitement was evident over the social media. Statistically, the Twitter experts and analytics stated that the baseball victory enhanced the social media impressions by 1,593.5%, as to the profile visits there was a 1,795.0% increase. And the final results posted on the Facebook, made it one of the major posts by generating over 10,000 shares and 48,517 likes.

Some of the tweets were: