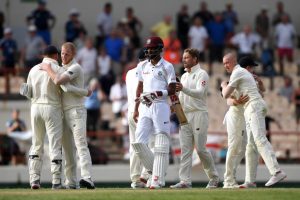 Roston Chase’s gutsy century was insufficient to stop West Indies tumbling to a 232-run annihilation to England on day four of the third Test in St Lucia.

Shannon Gabriel, who was sanctioned by the ICC of a breach of article 2.13 of its set of accepted rules after a sledging episode including Joe Root on day three, was booed when he took the ball in the primary session and Root sent the pacer’s  full toss directly to Shimron Hetmyer at midwicket in the 6th over of the day and promptly declared on 361-5.

England added 36 runs to their total score to set the Windies a robust targer of 485,which the hosts never looked like scoring, in spite of Chase making a splendid century 102* off 191 balls.

Keemo Paul suffered from thigh damage on day three, however limped out to the pitch with Chase two shy of a fifth Test century, yet the match was more than seven balls after he made it to three figures.

Paul was caught and bowled by Ben Stokes (2-30) as England grabbed an encouragement win – their first in Tests in the Caribbean since 2004 – for a 2-1 series thrashing, the Windies bowled out for 252.

It’s all over in St Lucia!

Shannon Gabriel has been ch… pic.twitter.com/36cdXDHSev

Just seen England have won the 3rd Test in St Lucia by 232 runs inside 4 days.Too late to salvage the series, but get back on track.Winter 6 tests 4 wins, 2 defeats, beat Sri Lanka 3-0, lose to the West Indies 2-1.