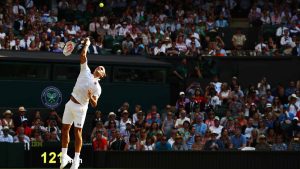 The last time @rogerfederer was on Centre Court, he equalled the record for most consecutive points won on serve by a man at The Championships – will we see a similar performance today?#Wimbledon @IBM pic.twitter.com/rARYYhGSIt

In his 200th Tour-level grass court match, @rogerfederer makes light work of progressing to the fourth round of #Wimbledon, beating Jan-Lennard Struff 6-3, 7-5, 6-2 pic.twitter.com/Yrk9OweKAt

A cut above the rest.

With today’s victory on Centre Court, @rogerfederer moved ahead of Jimmy Connors with the most wins on grass by a man ever ?#Wimbledon #TakeOnHistory pic.twitter.com/7jdW7v85zr

#9 Isner is into the second week at #Wimbledon for the *first* time on his 10th try.

He next faces #31 Stefanos Tsitsipas.

Just what the doctor ordered.

After a grueling five-setter in the second round, No. 9 John Isner picks up a relatively routine 6-3, 6-3, 6-4 win over Radu Albot.

The American is through to the fourth round pic.twitter.com/lH2oSDqniG 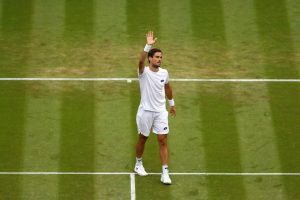 He’s got it!!! What a dream run for Mackenzie McDonald. Played a great match against Dimitrov at AO that he barely lost. Now into the 4th round at Wimbledon ???

Mackenzie McDonald is into the fourth round at #Wimbledon in his debut?.

Wonder which former Top 10 player used to coach the ?? and what connection McDonald shares with Brad Gilbert (@bgtennisnation)? ?

For Women’s Singles highlights move to the next page!