The first two matches of the quarter finals were held of the ongoing FIFA World Cup 2018. The match wise highlights are appended below.

2006 – Raphael Varane is the first French ?? player to score in a World Cup quarterfinal since Thierry Henry against Brazil in 2006. Head.#WorldCup pic.twitter.com/bxRkJQLjgX 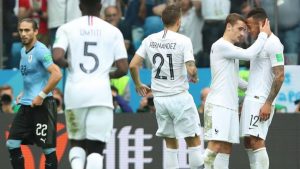 France are into the semi-finals of the World Cup for the first time since 2006 after seeing off Uruguay thanks to goals from Raphael Varane and Antoine Griezmann.

Raphael Varane has to be one of the most experienced & successful 25 year old’s of all time. Its remarkable what he’s done at his age. Achieved more by his mid 20’s than a huge proportion of top players achieve in their entire careers.

Meanwhile over in France, the French fans can’t hide their delight at Raphael Varane’s opener!

3 – Raphael Varane has scored his 3rd goal for France ?? (each time with a header), his 1st since March 2015 against Brazil. Timing.#Worldcup pic.twitter.com/T2r3Dk4h8M

Mbappe, Griezmann, Pogba, Giroud are doing what Messi and Ronaldo was meant to do for there countries.

Argue, and debate all you want.
This is facts.

CR7 and LM10 are overrated on the international stage, due to them being surrounded and playing with a elite club#URUFRA

That was really sportsmanlike of Griezmann not to “celebrate” the goal because it was partly a goalkeeper error.

To read the highlights of the next match between Brazil and Belgium move on to the next page!