Allsportspk presents to you the 1st half of round of 32 of men’s and women’s singles of Wimbledon 2018.

South Africa’s Kevin Anderson advanced to fourth round of Wimbeldon tennis championships. The eighth seed beat Germany’s Philipp Kohlschreiber 6-3, 7-5, 7-5. Will play the winner of the match between Sam Querry of the US and France’s Gael Monfils in next round. #sabcnews

#SouthAfrican through to #Wimbledon last 16: #SouthAfrica‘s number eight seed #KevinAnderson has made it into the last 16 with a straight sets (6-3, 7-5, 7-5) win over #Germany‘s #PhilippKohlschreiber – who was seeded number 25 pic.twitter.com/Ze3znnDjB1 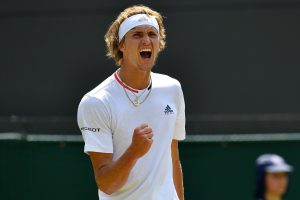 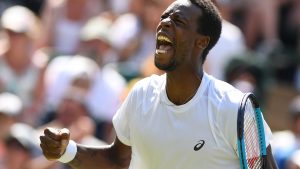 Gaël Monfils is into the fourth round of Wimbledon! ?? He beats Sam Querrey 5-7, 6-4, 6-4, 6-2 in just over 2 hours! ?? Impressive performance from Gaël today! ?? Up next: Kevin Anderson #Wimbledon – Pic from Gaël’s IG page pic.twitter.com/sPEOeZPbNQ

? It’s been a fantastic week for French maverick Gael Monfils ! 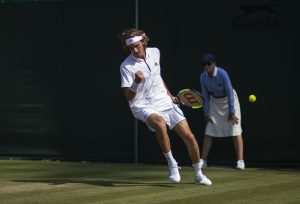 A Greek man once again gets into the fourth round of a major since 2004.

Stefanos Tsitsipas is into the 2nd week of a Slam with a 6-2, 6-1, 6-4 win over Thomas Fabbiano. #Wimbledon #Newfanzone

.@StefTsitsipas has become the first Greek player in 14 years to reach the fourth round of a Grand Slam after beating Thomas #Fabbiano (who beat Wawrinka) 6-2, 6-1, 6-4.

Tsitsipas @StefTsitsipas at his first time in the main draw at Wimbledon is into the fourth round after beating Thomas #Fabbiano 6-2, 6-1, 6-4. #Tsitsipas #Wimbledon ????????? pic.twitter.com/w1DDpk40G9

For Women’s Singles highlights move to the next page!