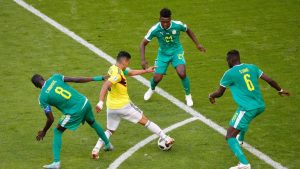 That was not a good performance at all, we should have gone to win or at least draw that game Colombia is not going to be easy at all!

Best Colombia and we’ve got a Quarter Final of Sweden or Switzerland. I’d of snapped ya hand off for that pre tournament. It’s coming home ⚽?

Colombia boss Jose Pekerman says he is “extremely concerned” by the injury sustained by James Rodriguez in his sides 1-0 win over Senegal. pic.twitter.com/7XlzbVNEMJ

Senegal could and possibly should have squeezed past Colombia to book at tie with England or Belgium in the last 16, but they fell to a Yerry Mina header form a corner to end Africa’s involvement in the World Cup.

My view on Yerry Mina: He is in te spotlights now and doesn’t want to leave Barça. If he leaves Barça it could be to a German or an English club as well. So don’t get your hopes too high. Signing him will also be a very big achievement. We are looking for Barça players for sure.

My view on Yerry Mina: He is in te spotlights now and doesn’t want to leave Barça. If he leaves Barça it could be to a German or an English club as well. So don’t get your hopes too high. Signing him will also be a very big achievement. We are looking for Barça players for sure.

Yerry Mina does it again. The Barca defender puts Colombia 1-0 against Senegal; this is his 2nd goal in the World Cup. Huge threat on set pieces and that dance ?. #WorldCup (@TelemundoSports) pic.twitter.com/M4P6JZMlai 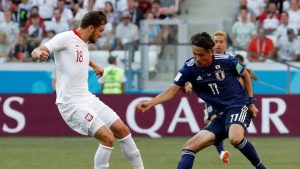 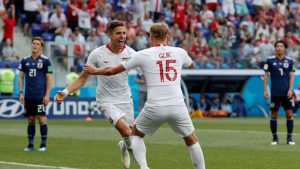 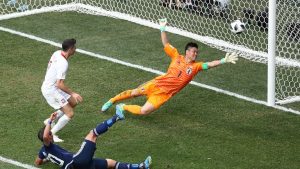 The future of Polish football. ?? pic.twitter.com/aC5U7puEHP

Jan Bednarek scores to give #POL the 1-0 lead over #JPN. He is the 9th player to score his 1st international goal at the 2018 #WorldCup

As it stands, #SEN and #COL would advance to the Round of 16 and #JPN would be eliminated pic.twitter.com/uiyeAAAA2c

Jan Bednarek (22) has given ?? the lead against ??. This means that Colombia and Senegal right now are through to the round of 16.

The last ten minutes of Japan/Poland showed SO MUCH LESS “fair play” than any yellow card. Football is unjust.

Poland’s World Cup summed up in two words – a test of your lipreading and Polish-language skills pic.twitter.com/D3e2q7gVMA

Knocked out on yellow cards. Cruel on Senegal. Farcical end to Japan v Poland as Poland backed off and Japan completed about 600 sideways passes playing out time.

Firmly in the “win the match” camp. Always. This feels like momentum halted and the wind out of England’s sails. Lots of countries that saw the lower-profile teams as supposedly easier pickings have already gone home.

If you thought the England match was bad, the following programme Good Evening Britain is truly mind numbing.

Anyone want to tell me why Marouane Fellani, Adnan Januzaj and Fabian Delph are all starting in a winner takes all group game at a World Cup? Am I missing something?

Can never forget what Adnan Januzaj did for our club at the age of 19. In a time of such uncertainty, his breakthrough season was a real shining light. Will always follow his career closely.

Nothing like celebrating and bonking yourself in the mush #Batshuayi #England #Belgium pic.twitter.com/DoTOEfBOgN

TEAM ENGLAND ??????? sorry you lost to Belgium 1-0! Now not top of the Group! Pllleeese pick yourselves up! The Best is YET to BE!What you believe in have the courage to labour for! WITH YOU! Love and Prayers!

I wonder if the English realise the Colombians, Swedes and Swiss want a Belgian win too as they would prefer to play England instead of Belgium.

Thank goodness we have a rest day tomorrow to recover from all the drama and exhilaration that England against Belgium brought us.

Ben Youssef finishes off beautiful passing play to even the score for #TUN#WorldCup pic.twitter.com/EcI4INIesb

THAT save from Yassine Meriah against Michy Batshuayi ???????? #CreditWhereDue

Panama lead through an own-goal by Meriah, off Jose Luis Rodriguez’s strike.
Yassine Meriah’s ?? own goal is the 50th in the World Cup history.

50 – Yassine Meriah’s ?? own goal is the 50th in the World Cup history. Blow. pic.twitter.com/HnuMHLqPfd

2 – Wahbi Khazri is the first player with both 2 goals and 2 assists at the 2018 #WorldCup. Versatile. pic.twitter.com/mQDvVzAOAs

Bubble has truly burst .. Reality check .. struggled past Tunisia, whalloped one of the smallest countries in the world and lost to Belgium Reserves .. hate to be disloyal to an Everton goal-keeper but a bit of naivety pushing balls back into play all the time ..

Join allsportspk on 30th June for the Round of 16 matches of the FIFA World Cup 2018.