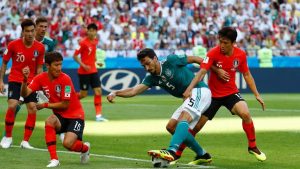 South Korea 2-0 Germany: The defending champions crashed out of the tournament after goals from Kim Young-Gwon and Son Heung-min in Kazan pic.twitter.com/tdukVOFbQD

INCREDIBLE STUFF IN KAZAN! FT South Korea 2-0 Germany! Kim Young-Gwon’s goal stands after the ref consults VAR. Heungmin Son then adds a second in stoppage. What drama! The World Champions are out of the #WorldCup. It beggars belief! We’ll have a new winner in Russia pic.twitter.com/BadrLh0Iz7

Wow! Germany fans unuh alright? This World Cup has been one of the most unpredictable ones ever!
Germany just crashed out of the #WorldCupRussia2018 after a stoppage-time VAR-assisted goal from Kim Young-gwon and a late second by Son Heung-min earned South Korea a famous 2-0 win. pic.twitter.com/Qwk8wFwp8I

As much as it hurts to bow out this early, congratulations to #SWE and #MEX. We wish you good luck in the knockouts ? pic.twitter.com/6gbNpePRTm

South Korea knocking Germany out of the World Cup is even better with the Titanic music… pic.twitter.com/IkyC9Zgczy

I just felt the entire population of Germany deactivate their accounts as soon as big Gazza Linekar waved his handpic.twitter.com/K9xAVkiEVq

Germany has been beaten by the team that played 90min with eyes closed. ??? #KORGER pic.twitter.com/HfbE3lFO30

Germany’s sensational exit from the #WorldCup has drawn comparisons to The Undertaker’s shock elimination from the #WWE Royal Rumble in 2002.

Although the Koreans don’t boast the thickness of Maven’s eyebrows, they do share a good kick! Shocking scenes today. pic.twitter.com/9n62Oqq9Qb

#SWE takes a 2-0 lead on a penalty by Andreas Granqvist, his 2nd goal at this #WorldCup

That is the 18th converted penalty at the 2018 World Cup, already the most at a single #WorldCup all-time pic.twitter.com/kxkejH6bFG

Andreas Granqvist, the Swedish captain who scored possibly the best penalty you’ll see this World Cup, is set to play in the second Swedish division in the fall

As it stands in Group F, #SWE would win the group and #MEX would finish runner-up. #GER and #KOR would be eliminated. pic.twitter.com/iWaNT2U4wx

1 – Ludwig Augustinsson has scored with his first ever shot at the World Cup finals. Assemble. #SWE #MEX #MEXSWE #WorldCup pic.twitter.com/0Fa4RHjBp6

What we’re not about to do is blame Edson Alvarez though, every goal that was conceded, Edson had two men on him. He received zero help from Layun all game!

Broke down when I saw Edson Álvarez crying at the end of the match cause of the own goal he scored.

I’m carrying that with me forever. Followed him the whole time with my eyes until he went through the tunnel.

Blerim Džemaili opens the scoring for #Switzerland against #CostaRica! Embolo knocked down the cross, and Džemaili was there to blast in an emphatic finish.

#WorldCup #Russia2018 #SUICRC
That was close for Switzerland to lead again as Josip Drmic header just rattles the post.

Switzerland made sure of a place in the last 16 of the World Cup but had to survive some anxious moments in Wednesday’s 2-2 draw with Costa Rica
The Swiss will meet Sweden in St Petersburg on Tuesday after Blerim Dzemaili opened the scoring pic.twitter.com/zcr7EvNzOu

IN CASE YOU MISSED: #SUI 1 vs 0 #CRC
Goalkeeper Yann Sommer was in inspired form early on as he kept out a succession of Costa Rica efforts, and just after the 30th min, Stephan Lichtsteiner’s deep cross was headed down by Breel Embolo into the path of Blerim Dzemaili who scored! pic.twitter.com/ucB6B0Udhx

? All 32 teams have now scored at the 2018 World Cup. #SUICRC pic.twitter.com/EDxSgBeFZc 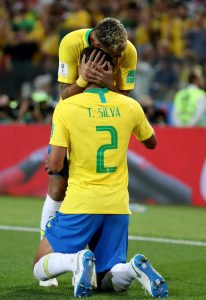 players like paulinho are only so good because they grew up in the slums and had years to practice. if jon jo shelvey wasn’t grafting his arse off in a chippy 5 nights a week to afford a 10 top up on his sony erikson ww80i he would easily be the better player.

Argentina going through with a Messi masterclass ✅
Ronaldo missing a penalty, because of which Portugal vs Uruguay ✅
Germany out with a disastrous performance by Kroos ✅
Brazil scoring with a Coutinho assist and a Paulinho Goal ✅ pic.twitter.com/h2xmG4KX0x

Brazil’s first goal today was as a result of a brilliantly executed pass by Coutinho. Jesus does well to drag the CBs to one side with Neymar and Willian providing the width to occupy the Serbian FBs. Brilliantly timed run by Paulinho to finish the pass#BRASRB pic.twitter.com/ScYaXNGLwa

The first goal of #Bra:
1 Jesus moves between the #Srb‘s CBs, moving LCB out of position.
2 Kolarov[LB] is too much concentrated on Willian, do not covers centrally the hole left by the LCB & there is a central schism in #Srb defence.
3 Paulinho attacks that empty space.#SRBBRA pic.twitter.com/8mdpYEM5R1

13 years ago, Thiago Silva nearly died of TB in a Moscow hospital, and was apparently rescued by Russian doctors. He spent nearly 6 months alone in a room, fearful that he wouldn’t be able to play football again.

Now, 13 years later, he has scored in Moscow at the #WorldCup ? pic.twitter.com/GAN1ewE2aq

Things I love: Neymar and Coutinho

Things I also love: Laughing at people who thought that today’s man of the match, Thiago Silva, shouldn’t have been brought to Russian, let alone be in the starting lineup. Silva all day ?

Coutinho is getting all the plaudits for Brazil so far (rightfully so) but it has to be said that Thiago Silva has been absolutely superb. 3 impeccable performances in the group stage by Thiago, who is truly looking like he’s back to his best.