Cristiano Ronaldo heads in his 4th of the FIFA #WorldCup pic.twitter.com/yNWw3fVQqu 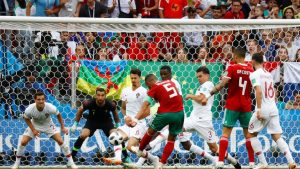 #ARG: We have the best attacking talent in the world- Messi, Higuain, Aguero, Di Maria…..Icardi couldn’t even make it.#POR: Well,we have Cristiano Ronaldo ?

? Cristiano Ronaldo today became the first Portuguese player since José Torres in 1966 to score a goal with his right foot, left foot and head in a World Cup tournament.

AND YOU KNOW WHAT HAPPENED THAT YEAR BOYS…

Moment of the Day ?

When @LuisSuarez9 found the net on his 100th appearance for @Uruguay ? 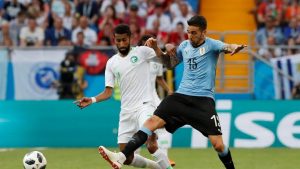 Russia and Uruguay are the first teams to reach the last 16. pic.twitter.com/EHigjmLMBE

Where was this fight from Saudi Arabia against Russia?

Everyone expected this game to be a blowout like Saudi Arabia-Russia but they held Spain to just 1 goal.

Luis Suarez – the first player to score at three different editions of the #WorldCup for @Uruguay! pic.twitter.com/B2xfSuZd47

FELIZ por ser parte de la HISTORIA
HAPPY to be part of Uruguay’s history accomplishing ? games!!!!! HAPPY to achieve the final 16 stage again ??? and even more HAPPY to share that we’ll have our third child ???THANK YOU ALL for the support specially to my loved ones ??? pic.twitter.com/GTpjxR9NkH

First to score 50 goals for Uruguay ✅

2018 has been noteworthy year in the international career of Luis Suárez. pic.twitter.com/BXKVrvuzIE 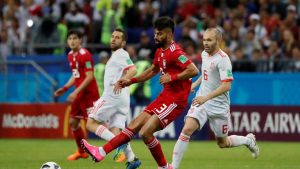 After dominating possession, Diego Costa puts #ESP ahead with a clumsy but effective goal #WorldCup pic.twitter.com/7DkxezUXme

Who will win Golden Boot? pic.twitter.com/OfrpFLEFYb

This Iran couldn’t arrange decent friendlies, training facilities, had Nike withdraw from giving them shoes and equipment, had lack of funds because of sanctions. The fact they’ve managed to achieve what they have is incredible. Everyone thought they’d lose to Spain and Morocco

I was saddened & shocked that ppl who knew me 4 years accused me of being a racist 4 political points. I oppose corrupt regimes which throw gays off buidlings & execute rape victims. I oppose BHO-VJ’s pro #R2P & their Iran deal.

This touched me. Big respect for Iran. pic.twitter.com/ITU5MLcxcQ