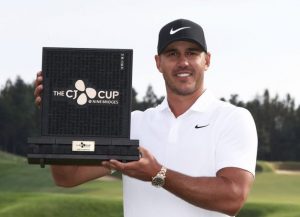 Brooks Koepka won the CJ Cup and jumped from the 3rd positon to the top spot, as Dustin Johnson moved to the 2nd and Justin Rose moved to the 3rd place respectively.

#ICYMI @BKoepka won the the CJ Cup over the weekend for his 5th career @PGATOUR victory. The win makes the reigning PGA Player of the Year the new #1 ranked golfer in the world! #FindYourGame (also this gives us an excuse to use our fav picture again??) h/t @PGATOUR pic.twitter.com/tdZCB9D1tm

Jason Day broke into the top 10, as Jordan Spieth downgraded to the 11th position. Some of tthe other significant upgrades were of Tyrrell Hatton, Rafa Cabrera Bello and Sergio Garcia who are now placed at 23rd, 26th and 27th place respectively.