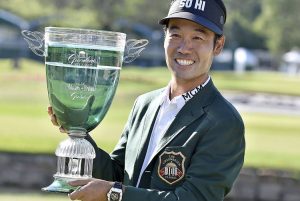 Dustin Johnson remained at the top of the Men’s Golf rankings followed by Justin Thomas and Justin Rose who are placed at 2nd and 3rd respectively. Meanwhile, Kevin Na won the Greenbrier PGA event and upgraded his rank from 65th to the 41st position.

Other notable upgrades were of the US Open’s winner, Bubba Watson who replaced Paul Casey to place himself at the 11th position.

It’s been a long time coming.