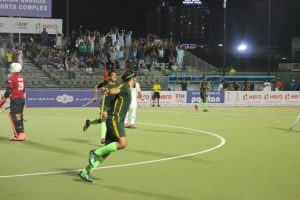 Malaysia had clawed back from being 1-4 down to level it in the 56th minute. The shootout was equally exciting. However, luck favoured Pakistan.

Two days back, when the two sides met in their last round robin match, there was almost nothing at stake but today it was for the place in the final. Pakistan has appeared in all the previous four finals while Malaysia had always finished third.

It was a thriller throughout.

Pakistan’s skipper Rizwan Sr had to sit out because of a hamstring injury.

The game got to a sensational start. In only the second minute, Malaysia captalised from some clumsy Pakistani defence near the 23 metre area to go ahead. Faizal Saari, their all time top scorer, sprinted into the circle and dived to put the ball through the pads of an advancing Imran Butt.

Pakistan hockey team won the semi-final against Malaysia in the Asian Champions Trophy! Congrats to the team, all the best for the final tomorrow boys #PakistanZindabad ?? pic.twitter.com/9TdGYBnOh3

The green shirts recovered immediately and were level within three minutes. A fine raid culminated in Ajaz Ahmad, sending an inch perfect square pass from the left side of the circle, to M.Irfan Jr who made no mistake from close range.

The up and down stuff continued with two penalty corners coming to each side. Pakistan’s ace PC expert Aleem Bilal rifled the second to the roof of the net.

They soon extended the lead. A loose ball due to a Malaysian blunder was well taken by Abubakr whose superb flat back hander went beneath the onrushing goal keeper.

So It was 3-1 for Pakistan after the first 15 minutes.

Five minutes later, another PC ripper from Aleem Bilal rattled the right side of the net. Both open play and penalty corner chances continued to arrive at either end but the scoreline remained 4-1 after the first 30 minutes.

The script remained the same: free flowing game. In the dying minutes of the third quarter Malaysia suddenly reduced the margin to the bare minimum through two fine field goals.

First, a ball remained in the Pakistani circle for sometime before Tengku’s hit went through Imran Butt’s pads to sound the board. It was immediately followed by the goal of the day. Aiman beautifully dribbled past two Pakistani defender near the right goal line to enter the circle. His minus was not taken well by his team mate. Iman, from the mid circle, slotted the stray ball into the goal himself to make it 3-4.

Most of the last quarter, Malaysia held the upper hand. With just four minutes left Malayisa made their supporters go wild with an equaliser off the seventh PC. Faizal Saari’s fast and low push went beneath Imran Butt’s right arm.
Malaysia even had an opportunity to go ahead but the eighth PC went a begging and it came down to the dreaded shootout.

Pakistan scored off the first two and Malaysia did not. Again Malaysia fought back but Pakistan finally managed to scrape through.