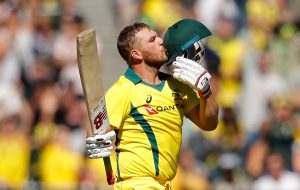 Aggression has a direct link with T20 cricket and this is why hard-hitters are an important part of this format. Hitting the ball out of the park is an art, and although many batsmen have this trait, few have the skill to do it on a consistent basis.

Aaron Finch falls in this list and his latest innings against Zimbabwe is a clear proof of his ball hitting prowess in this format. That’s why Allsportspk panel calls him – The T20 Terminator

His latest blistering knock was of 172 from only 66 balls, in the tri series against Zimbabwe.

Aaron Finch smacks 172 off 76 balls and breaks his own world record for the highest individual score in T20 internationals.

This was the highest score ever scored by a batsmen in T20 cricket. It was also a record 200 partnership between the batsmen which also helped Australian cricket team to put a huge score of 229 on the board with the loss of only two wickets. Zimbabwe, in return, could only score 129 for 9 in 20 overs.

The 31 year old also scored a match-winning knock of 68 not out coming off only 33 balls against Pakistan yesterday. The opener played a captain innings of 68 that included 4 fours and 6 sixes with a strike rate of 206. Australia was able to chase a target of 117 with 9 overs to spare.

So far, in the ongoing tri series between Pakistan, Australia and Zimbabwe, Australia had won all the two matches and in both Aaron Finch was player of the match. He played a responsible captains knock in both the matches.

Highest individual score in all formats:

Aaron Finch has proved himself very valuable to the Australian cricket team. He is the only player who has two 150+ scores in T20 cricket. His previous highest score was 156 which came off against England in 2016. Here’s a video of that brutal innings that will take you down memory lane.

Moreover, after the ban of Smith and Warner, Finch was able to lead the inexperienced Australian team and has been playing sensibly since then. His stats prove it:

Finch’s away record is much better than his home record: