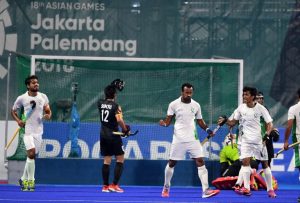 After three huge wins against the minnows, Pakistan had their first real test at the
Asian Games Hockey. They came across Malaysia who too had won their three games
comprehensively.
Breaking Asian Games ’18 – Hockey: Pakistan Beat Oman 10-0
The first half saw more or less an even contest and it was 1-1 after 30 minutes.
But the Green Shirts were easily the better side in the next half an hour and went out
with a well deserved 4-1 victory.

After Malaysia’s first penalty corner was well anticipated by the net minder Imran Butt in the third minute, Pakistan went ahead with their opening PC in the sixth minute.
Experienced Irfan Senior’s well directed flick found the middle of the net’s left side.
Pakistan’s two reverse attempts from top of the circle were well taken by the Malaysian goal keeper Kumar.

Malaysia equalised in the 11th minute also through a PC. Faiz Halmi Jali’s flat and angular push completely deceived the Pakistani defenders and Imran Butt.
Second period was also even. Pakistan twice had back to back penalty corners but some good rushing did not let them avail any of the four. Malaysia relying mainly on the counters had two excellent opportunities but  could not make them count; once the ball came off the pole.

The third quarter saw Pakistan firing on all the cylinders. The ball mostly remained in their opponents’ territory. They had three back to back penalty corners but first the rusher and then the poorly executed indirect attempts denied them the goal. Soon the 9th PC was also wasted.
Asian Games ’18 – Hockey: Pakistan Beat Thailand 10-0
However, the persistent pressure paid off. In the 38th minute Ali Shan brilliantly penetrated into the circle from the left. His parallel hit was easily caressed in by Ajaz Ahmad standing unmarked close to the opposite pool.
Four minutes later, it was 3-1 as the 10th PC was converted. Mubashar Ali’s fast and strong flick found the left side of the tin.

What A Win Shaheens It’s A Big One???
Keep It Up Boys ???❤#AsianGames2018 pic.twitter.com/AooafavW0l

Just two minutes into the fourth quarter, Pakistan’s fourth goal arrived. A swift move saw
Malaysian defence in tatters and Ajaz Ahmad in the centre of the circle applied the finishing touch for his second of the evening.
Green Shirts apparently took the foot off the gas in the last minutes. Malaysia did have a couple of field chances and a penalty corner but failed to reduce the margin.
Pakistan’s last pool match is against Bangladesh who have three wins and one loss.
Barring a big defeat against them, which is most unlikely, Pakistan are assured of not only the semi final spot but also winning their pool.