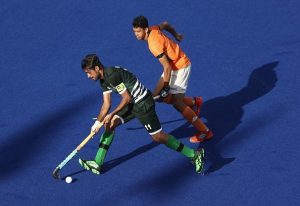 JAKARTA: Pakistan began their hockey campaign at the Asian Games with a flying start after they beat Thailand by 10-0.

Pakistan trash Thailand 10-0 in Asian Games hockey opener https://t.co/5y5y1zMwem
So, the Pakistani team isn’t the least well-prepared and most neglected team in the world. Big deal!

The opening hockey game, played at Gelora Bung Karno (GBK) Sports Complex in Jakarta, Indonesia, was commanded by Pakistan, who have won the competition a record eight times in total.

Yesterday Pakistan football defeated Nepal by 2-1 and won a match after 44 years.

The silver medallists of the last edition of the Asian Games did not allow Thailand to resist as they struck 21 shots at their opponent’s goal, 12 through field moves and 9 through penalty corners. In the mean time, Thailand had just a single try at Pakistan’s goal which was spared by goalkeeper Muhammad Imran.

Pakistan were already leading by 4-0 at the end of the 2nd quarter, courtesy of Tauseeq Arshad’s excellent penalty in the last minute of the principal half. In the 3rd and 4th quarter, 6 more goals were scored as Pakistan won the match by 10-0.

Pakistan Hockey will now play their next match against Oman on Wednesday.