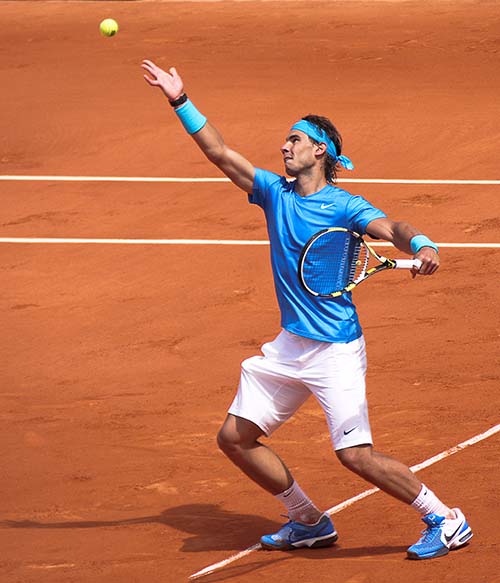 It was an exciting and surprise filled opening day at the Australian Open 2018. The first Grand Slam of the year started with a fair few surprises. These accompanied brilliant performances by some of the favorites, including a certain Spaniard. The following are the highlights of Day One.

Those worried about Nadal’s recent injury must have been nervous over the current world no.1’s performance levels before the start of the match. There worries were well and truly laid to rest as Nadal sweeped aside his Dominican opponent with ease. In a match that sometimes had the feel of an exhibition, Nadal ripped forehand winners almost at will and was comfortable enough to test out his net game against his overwhelmed opponent. The match was played in a wonderful spirit. Burgos enjoyed every game he won and was appreciative at the sheer brilliance of the legend he was battling. The match ended with a warm embrace at the net which was applauded by the whole crowd.

Nick Kyrgios, the charismatic wildcard in tennis, started off his tournament in commanding fashion as he dispatched his opponent with relative ease. Kyrgios struck 16 aces and made an impressive 73 per cent of his first serves. Importantly, there was no sign of the knee issues that that have plagued the Australian already this year.

In a terrible day for American tennis, where the US competitors won just 3 out of 12 matches, Venus Williams suffered a shock first round elimination at the hands of the resurgent Bencic. One of last year’s finalists, Venus played tennis well below her high standards and was made to pay by her clinical opponent who was not even born the last time there was no Williams sister in the second round of the Australian Open (January 1997).

All eyes will be on Novak Djokovic as he plays his first competitive match since July against America’s Donald Young. Roger Federer then kicks off the Rod Laver Arena night session with a match against Aljaz Bedene, while Juan Martin del Potro against American rising star Frances Tiafoe is sure to be another tasty affair.