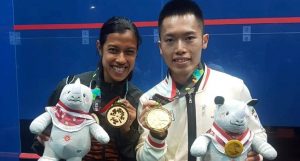 The finals of all HK China Men’s and all Malaysian Women’s were played at the Gelora Bung Karno Sports Complex in the Indonesia capital Jakarta.

The men’s final was between second seed Max Lee, the Hong Kong No.1, and domestic rival the World No.21 Leo Au. In a competitive match Au continued his form and become the first HK China player to win gold in the men’s squash event.

Congrats to @NicolDavid the gold medalist! Kudos to Sivasangari 19 years old contender!! A new breed of contenders are evolving!!! A round of applause! pic.twitter.com/J389tEZ1mN

In the women’s final, Malaysian living legend Nicol David celebrated her 35th birthday by claiming a record 5th Asian Games gold medal, which was 20 years after she had won her first gold.

Although Nicol won the gold but she had to fight back from 2-1 down to overcome fellow country teenager Sivasangari Subramaniam.

The detailed results of the finals are as follows: