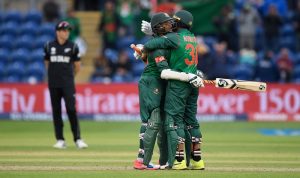 Toss won by: New Zealand who decided to bat

– Bangladesh innings had a shaky start with Tim Southee depleting the Bangladesh top order batsman by taking three wickets in the early overs.

– Mahmudullah and Shakib Al impressive partnership was the match winner for Bangladesh.