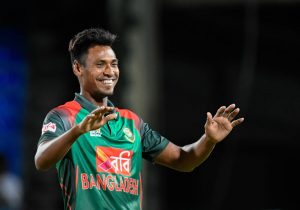 Chasing 250 for victory, Afghanistan required 19 off the last two overs, then eight off the last until it came down to the final delivery with Samiullah Shenwari needing to hit a four to win. However, Mustafizur Rahman held his nerve at the death to secure a nail-biting victory for Bangladesh, who will face India in the final of the Asia Cup 2018 if they can prevail in a winner-takes-all clash against Pakistan on Wednesday.

It was cruel on the Afghans who lost a similarly close encounter with Pakistan only two days previously. On that occasion the Pakistanis sneaked home in the final over to win by three wickets. Nonetheless, they played a full part in what was an enthralling contest which see-sawed throughout.

After winning the toss and electing to bat, Bangladesh looked well shy of a competitive total after slumping to 87/5. Having been 81/2, the introduction of Afghanistan’s trump card, the leg-spinner Rashid Khan, had an immediate effect.

Liton Das, who had played beautifully for his 41 from 43 balls, had a rush of blood to the head and top-edged an attempted sweep shot to slip. It precipitated a chaotic period of play which saw key man Shakib Al Hasan run himself out for a duck two balls later, before Mushfiqur Rahim was also run out in Rashid’s next over.

Thankfully for Bangladesh, Mahmudullah (74 from 81) and Imrul Kayes (72* from 89) – on his return to the side after being called up as a late replacement for the injured Tamim Iqbal – showed much cooler heads, putting on 128 for the sixth wicket to bat their team into a strong position.

Bangladesh have won it! Mustafizur Rahman the hero!

He conceded just four from the last over and Bangladesh have won this thriller by three runs! #AFGvBAN

Re-live the action and follow the post-match reaction ??https://t.co/AOjzkGPavg pic.twitter.com/Ig66ERKDxl

Mahmudullah eventually fell in the 47th over, becoming a third victim for Aftab Alam (3/54), while Kayes remained undefeated as Bangladesh posted 249/7.

Afghanistan’s reply got off to a rocky start when Mustafizur dismissed Ihsanullah with his first delivery, the opener slicing to Nazmul Hossain Shanto at point, and Rahmat Shah was then run out by Shakib for 1.

An uncharacteristically sedate half-century from the usually explosive Mohammad Shahzad (53 off 81) and a more aggressive half-century from Hashmatullah Shahidi (71 from 99) kept Afghanistan in the hunt and captain Asghar Afghan (39 from 47) continued the momentum after Shahzad was bowled by Mahmudullah.

The loss of Hashmatullah, bowled by Mashrafe Mortaza, brought the big-hitting Mohammad Nabi to the crease and his blitz of 38 from 28 balls swung the game in Afghanistan’s favour and ramped the pressure up on Bangladesh.

A very likely scenario!
– Pakistan beats Bangladesh on Wednesday.
– Makes a strong comeback in final against India and wins it!
—— and then everything will be back to normal for our fans. There won’t be any parchi taunts, there won’t be any calls to axe anyone.

Nabi fell, though, with nine balls remaining, caught by Nazmul off Shakib, to increase the tension further still.

Mustafizur’s caught-and-bowled dismissal of Rashid from the second ball of the 50th over left Afghanistan’s chances in the hands of Shinwari (23* off 19) and Gulbadin Naib, but the left-arm quick showed his class to seal a crucial victory – Shenwari hurling his bat in the air as he attempted to hoick the ball into the leg side to find the boundary his team required for victory.