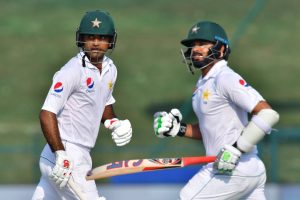 Fifties from Azhar Ali & Fakhar Zamanenable Pakistan to take full control of the ongong 2nd Test, as the hosts finished the second day with a lead of 281 runs. Azhar Ali and Haris Sohail will continue the Pakistan innings on Day 3, as Ali would be cheerful to change over his fifty into a well-deserved century.

Prior in the day, Australia were wrapped up for 145, which saw them trail by 137 runs. For Pakistan Mohammad Abbas was the principle supporter with the ball, as the right-arm quick bowler asserted 5 wickets in the 1st innings. Only Aaron Finch who scored 39 runs and Mitchell Starc who scored 34 runs, were the top scorer of the Australia 1st innings.

Half-centuries from Azhar Ali and Fakhar Zaman have guided the hosts to 144/2, extending their lead over Australia to 281 runs.#PAKvAUS scorecard ➡️ https://t.co/IWYRSTllSs pic.twitter.com/NRCKt4WVT0

Half-centuries from Azhar Ali and Fakhar Zaman have guided the hosts to 144/2, extending their lead over Australia to 281 runs. pic.twitter.com/2RPk76QcDm

Mohammad Abbas is a shoe-in for a bowling spot in a World Test XI now, isn’t he? Along with Rabada, Anderson and Starc? (Hard luck, Shami)

Article on his journey tonight.

A superb effort by Pakistan bowlers today particularly Muhammad Abbass following Azhar Ali along with Fakhar Zaman and Haris Sohail in batting in 2nd innings of Pakistan. Hope they will continue to bat well tomorrow #PAKvsAUS

For more updates about Pakistan vs Australia keep visiting allsportspk