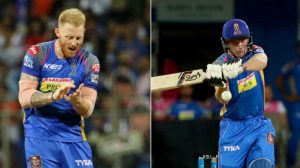 In 2017 IPL, the 27-year-old, All-rounder Stokes, featured for Rising Pune Supergiant, and was named Most Valuable Player of the tournament.

Meanwhile, the 28-year-old, Jos Buttler scored 548 runs in the current year’s competition, which also allowed him to win a place in the England Test squad.

IPL 2019: England’s Ben Stokes and Jos Buttler retained by Rajasthan Royals: Stokes was the 2017 IPL MVP after blistering performances with bat and ball and has proven a big hit with local fans while Buttler impressed in last year’s renewal : https://t.co/xLTB4kACSc

Buttler and Stokes are at present in Sri Lanka with England.

Jofra Archer who was quite effective with the ball, has also been retained by the franchise.

In the wake of being elevated up the order, Jos Buttler, who was bought at the cost £485,000, made 5 successive fifties last season, tying the IPL record of Virender Sehwag.

David Warner has been also been retained by Sunrisers Hyderabad for the up and coming period of the Indian Premier League in the wake of having passed up the past release because of his ban following the ball-tampering outrage.

In any case, regardless of whether he will continue captaincy, given that Kane Williamson wore the captain’s cap in the past season stays to be seen.