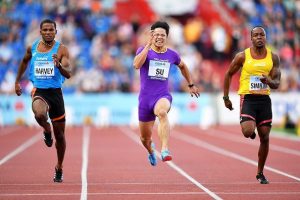 Team Americas beat the defending champions, Europe by 29 points to win the IAAF Continental Cup in the Czech Republic.

This was the 3rd  release of the Continental Cup, which replaced the World Cup for individual countries in 2010.

It’s another win for #TeamAmericas as @AlonsoEdward takes the 200m in 20.19

At the last individual event in Ostrava, USA’s Noah Lyles won the men’s 100m in 10.01 seconds for Team Americas. And, the win for Team Americas was guaranteed by winning the blended 4x400m relay.

The two-day IAAF Continental Cup saw four teams- Africa, the Americas, Asia-Pacific and Europe – go after points over an assortment of occasions, with every locale having two delegates in every event aside from relays, when they fielded one team each.

The last women’s track event of the day sees the Americas team win comfortably in 42.11 – the all British European team anchored by Dina Asher-Smith is second in 42.55 #IAAFOstrava2018

South Africa’s Caster Semenya won the women’s  800m for Africa in 1 minute 54.77 seconds. Meanwhile, Britain’s Meghan Beesley completed 4th for Europe in the women’s 400m obstacles, which was won by Jamaica’s Janieve Russell in an time of 53.62 seconds.

Shara Proctor dealt with a best of 6.63m to complete 5th in the women’s long jump for Europe, which was won by Colombia’s Caterine Ibarguen for Team Americas in a national record of 6.93m.

More high quality in the field as Europe’s Olympic champion Thomas Rohler wins the javelin with a 87.07m throw and world champion Sam Kendricks wins the pole vault for the Americas team with a 5.85m leap #IAAFContinentalCup

Meanwhile, Marc Scott was knocked out with two laps remaining in the men’s 3,000m and was granted 6th place for Europe. Also, USA’s Paul Chelimo won the 3,000m out of 7:57.13 for Team Americas.