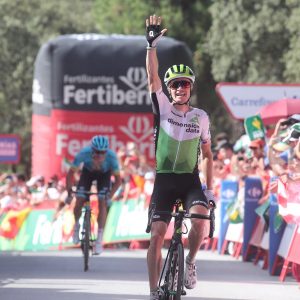 Ben King won stage 4 of the Vuelta an España after out-dashing Nikita Stalnov at the summit finish on the Puerto de Alfacar.

Michal Kwiatkowsi got back home barely 3 minutes down to hold the red shirt, although Simon Yates debilitated his lead by assaulting in the last 4 kilometers.

Valverde with the little sprint, never got over losing on Hautacam… ??
Ben King. BEAST.
Yates, to eager? worked fine today, also worked fine for 2 weeks at the Giro…

Lord and Stalnov were the last survivors of the day’s initial break, having produced far from their kindred escapees at the base of the category 1 pull up the Puerto de Alfacar.

The main pair were nearly gotten by their past companion, Pierre Rolland underneath the flamme rouge, however the Frenchman was separated once more when Ben King kicked for the line.

Congrats to Ben King who finally had chance to show his class and pay back team — he already signed contract extension for 2019 before Vuelta started (photo @lavuelta ) pic.twitter.com/Zqq4N5H0Wp

Ben King spent a significant part of the day in the virtual race lead, yet LottoNL-Jumbo’s pursuing on the last climb step by step diminished the break’s sizeable preference. His center returned to pursuing stage triumph in the end kilometers, and he demonstrated quiet and quality in the last kilometer to assert the greatest win of his professional career so far.