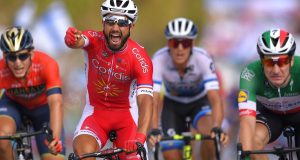 Nacer Bouhanni dashed to triumph on stage 6 of Vuelta a España, beating Danny van Poppel and Elia to the finish line. The final stage was cursed by crosswinds, parting the peloton into a few gatherings, anyway the key sprinters still made it into the front.

At last, it was Quick-Step who lead things out into the last straight, yet their sprinter Viviani was too far back to challenge for triumph. It was European Champion Matteo Trentin who drove it out with his run, yet gave an immaculate platform to van Poppel and Bouhanni who battled to the finish line.

It was the Frenchman who held his slight leeway in front and, beating the Dutchman to take a hotly anticipated Grand Tour triumph, with his last win coming at the Vuelta in 2014.

Overall, the majority of the key players made the front determination, but Wilco Kelderman and Thibaut Pinot both wound up well behind, the previous on account of a cut at just shy of 19 km to the finish line.

So cool to see @tonythetiger_1 in the Canadian National Champ jersey on the front of the @lavuelta peloton today! Chapeau @Rudymolard and @GroupamaFDJ

At the finishing moments, the pair were not able protect much time in the wake of losing ground, seeing their GC hopes take a tremendous thump in the wake of arriving 1-44 back on the stage.

#Cycling #Vuelta2018
Nacer #Bouhanni conquers the sixth stage at #LaVuelta18 !
A peremptory sprint and he crosses the line first! Only third the Italian sprinter @eliaviviani, unable to set the second win of the season there in Spain. Extraordinary job, Nacer and @TeamCOFIDIS! pic.twitter.com/GzGekxpPuI