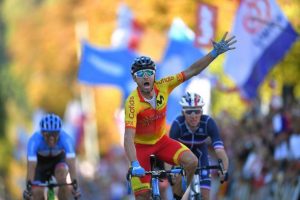 Spain’s Alejandro Valverde showed his excellence in a sprint finish, to win the men’s race at the Road World Championships.

Valverde completed only in front of France’s Romain Bardet, Canada’s Michael Woods and Tom Dumoulin of the Netherlands in Innsbruck, Austria.

The 38-year-old had already completed on the platform a record 6 times.

Peter Kennaugh completed sixteenth for Great Britain and Adam Yates 37th, however Vuelta a Espana champion Simon Yates did not wrap up.

Valverde, Bardet and Woods hustled the last couple of kilometers of the 258-kilometer bumpy course together, before being joined by Dumoulin going into the last kilometer.

Spaniard Valverde drove the last dash for the line and stayed unchallenged to beat Bardet by a little more than a bicycle length, with Woods third.

He’s had his ups and downs in his pro professional cycling career. Amazing to think he didn’t ride a single bike race in 2011, presumably because he was busy doing other things.