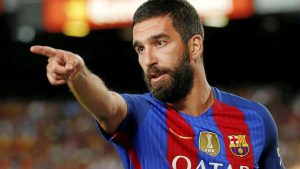 The Turkish International drove his greatly made Atletico Madrid side to the 2013/14 La Liga title, thus breaking the stalemate between Real Madrid and Barcelona, and being a standout amongst the most furious assaulting midfielders in the football world.

In 2013, he was positioned by the Guardian as #36 in the main 50 biggest footballers ever, abandoning any semblance of Alexis Sanchez and Juan Mata by then. The assaulting midfielder was considered as one of the best dangers that the Atletico Madrid side brought to the table, as to a great degree possessive yet ‘composed’ style of play enabled his colleagues to lift off their stresses as playmakers.

In the wake of leaving to Barcelona in 2015, Turan, and Barcelona’s desire went up to a great degree high, as Luis Enrique had bartered an arrangement for a standout amongst the most specialized football players on the planet.

Shockingly, the Turkish ended up being a mistake. With just 36 appearances over a short time of 3 years, the previous Atletico Madrid powerhouse was seeing simply seated on the bench. With injuries heaping up in his CV, and with almost nothing to boast about, Turan left Barcelona for the Turkish side Istanbul Basaksehir on loan from Barcelona towards the beginning of the 2018/19 season.

For the #3 superlative footballer, who has now lost his charisma, move on to the next page!