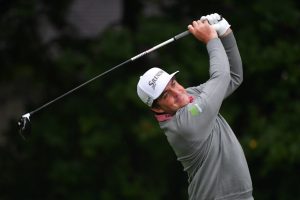 Keegan Bradley held off Justin Rose in a sudden-death playoff to win the rain-plagued BMW Championship on Monday for his first PGA Tour victory in six years.

Though Rose was runner-up at the FedEx Cup playoff event at Aronimink, he didn’t come up short in the world ranking. Rose hit No. 1 in the world and became the 22nd player to reach the top spot since the ranking began in 1986.

Bradley, who shot a final round 6-under 64 to finish at 20-under par, thrust his arms toward the gray sky and drizzle in celebration and waved his family onto the 18th hole. He tossed his young son, Logan, who wasn’t even born the last time Bradley won on the tour, into the air.

Bradley winds up with his first victory since the 2012 WGC-Bridgestone Invitational. He gets a trip to Maui to start next year for the winners-only Sentry Tournament of Champions.

Rose could have won in regulation but lipped out on the last hole to force the playoff.

@JasonSobelTAN it seems like Keegan Bradley should be in the top five of the FedEx Cup standings for the PGA tour. Shouldn’t winning a playoff event get you into the top five regardless of where you started the week at points-wise?

@Keegan_Bradley Congratulations on winning the BMW Championship.
It was a long hill to climb for the past six years, but you’re back. We’re pulling for you all the way.