One match was held today of the ongoing International Champions Cup 2018. The match wise highlights are appended below the points table.

Match 3 of 27: Liverpool Vs Borussia Dortmund 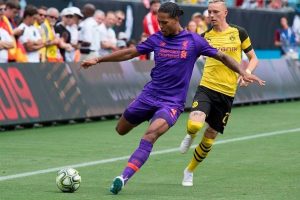 Christian Pulisic scores his second goal in a 3-1 Dortmund win over Liverpool in the ICC ?????? pic.twitter.com/HPQD75h3we

93′ GOOOALLL @cpulisic_10 with a great move & shot. Save by @LFCUSA but great finish by Jacob Bruun Larsen.

Couldn’t beat a top 3 Mexican side and a bottom MLS side. Milan, Liverpool, Madrid and Bayern next, joyyyyy. Look forward to seeing Fred in action next week, any positive i can take right now, where there are very little, with Andreas also being an example.

Visit Allsportspk on 26 July for the next 6 matches of the International Champions Cup 2018.