Two more matches were held of the ongoing International Champions Cup 2018. The highlights of the matches are appended below the points table. In case, you missed the matches held on 5th August, click here.

How about that, Chelsea fans? ?

Eden Hazard one of the last players out at Stamford Bridge for the warm up and people noticed. Big ovation as he comes back out on Stamford Bridge. #CFC #OL #ICC2018

Watch as @ChelseaFC beat @OL 5-4 on penalties. #ICC2018 #ChampionsMeetHere brought to you by @Heineken_US

International Champions Cup – Match 26 of 27: Real Madrid Vs AS Roma 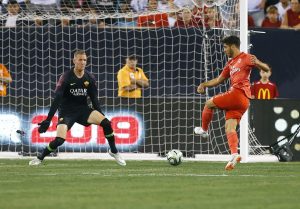 Madrid has got Marco Asensio and we don’t need any other player to replace our legendary Cristiano Ronaldo. Looking forward to a great season ahead. La Liga should be the priority in 2918/2019 #HalaMadrid

Visit Allsportspk on 12th August for the last match of the International Champions Cup 2018.