These are the next six three matches of of Serie A, Match Day 14 of 38. The highlights are appended below the points table. 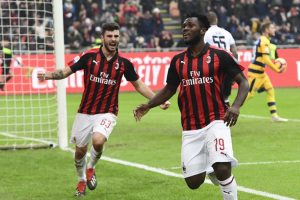 Milan wins!! Great Job Makos!!!! Thank you to everyone who worked so hard to pull this meet off. Thanks to all the swimmers and the great coaching staff I get to work with!

Milan came from behind to register a 2-1 win against Parma. Roberto Inglese had given the visitors the lead before Patrick Cutrone and Franck Kessie’s goals, the latter a penalty, clinched all three points for the Rossoneri. #MilanParma

What THFC fans dont understand after two wins against Chelsea and Inter Milan, the team changes at the back, with not enough pace and we had pace and probably one of the best central defenders in Toby Alderweireld on the Bench definately down to Pochettino!!!!

The match between Frosinone and Cagliari ends in draw!

There was also a comeback for Torino against Genoa who had fallen behind to a Christian Kouame goal before two quick-fire goals from Cristian Ansaldi and Andrea Belotti secured a 2-1 win for Toro. #TorinoGenoa

For the next three matches move on to the next page!