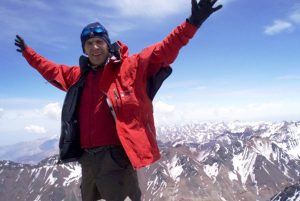 Serge Dessureault a Canadian mountaineer fell to his death while leading an international expedition on Pakistan’s K2. Two other Canadians, Maurice Beausejour and Nathalie Fortin, were part of the expedition.

Canadian Climber Dessureault, 53, a firefighter in Montreal for around 30 years, was was leading a nine-member K2-Broad Peak expedition, which is extremely steep and attracts notoriously bad weather.

Announcing the news an official of the Alpine Club of Pakistan, Mr. Haidri said, Dessureault died in a fall while scaling the 8,611-metre mountain K2, located in the Karakoram range in northern area of Pakistan.

The details of what led to his fall are still not known.

“All our sympathies go to Serge’s family and loved ones,” said Fortin on Facebook. “We’re speechless.”

On Saturday morning, that same page announced Dessureault’s death with “indescribable sadness,” saying he fell near camp 2 and his body had been recovered.

The page does not announce any other injuries or deaths in the incident.

His death was a shock for many. Benoit Lamoureux who two years ago together with the Canadian Climber Dessureault had attempted the treacherous K2, but due to an avalanche at Camp 3 the climb was revoked. During an interview with CTV News Channel Benoit said,

Another climber François Guy Thivierge who became a friend of Dessureault eight years ago on a volunteer trip to Haiti, while talking to CBC News said: